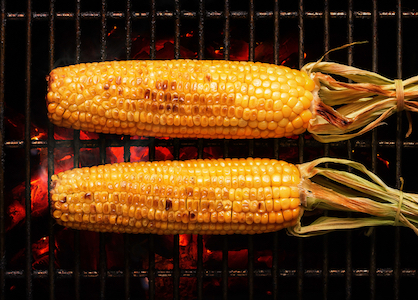 Grill These Vegetables Before Summer Ends

Summer is well underway and while it seems like it’s the end of the season for some produce, it’s the perfect ripening time for others. Finding local and seasonal produce will bring vibrant color and flavors to your summer dishes and a higher concentration in vital micronutrients. It’s time to get cooking while we still have our long summer days and nights and incredibly delicious and nutrient rich produce. Fire up the grill with these seasonal veggies before summer is over.

Tomatoes are ripe well into August and September and are one of the most versatile produce to grill. Rich in lycopene, an antioxidant that may help to lower the risk of certain cancers, charred tomatoes give an irresistible smoky flavor in all kinds of dishes from salad, soup, salsa and pastas or even when served on their own. (See five important health benefits of tomatoes.) For grilling, choose those dark in color, with thicker skins, like plum or cherry tomatoes.

How to Grill Tomatoes: Use high heat when it comes to grilling tomatoes (you should be able to hold your hand over the grate for no more than three seconds). Use a skewer or grilling grate/basket for cherry tomatoes, or place whole/halved tomatoes to place directly on the grill. Place skin side down for three to five minutes and flip over for another three minutes. Avoid thick slices, as the seeds and juices can make it hard to maneuver. Brush lightly with olive oil prior to grilling to avoid the tomatoes from sticking. Finish by dressing with vinegar and salt/pepper for the perfect summer side dish.

Fall squashes like acorn and butternut are right around the corner, but summer squash and zucchini are in season right now, from August through September. Look for the young, smaller varieties as they will provide much more flavor.

How to Grill Summer Squash: Slice squash up into cubes or rounded circles to either string onto a skewer for kabobs or to add to a grilling basket or tray. You can also cut your zucchini into strips to put directly on your grill. Either brush with olive oil or marinate in olive oil and herbs for 10-30 minutes placing on the grill over medium-low heat (grilling for three minutes each side).

Every color you can imagine from green, to yellow, orange, purple and red are ripe and in peak season from July through September. With only 30-40 calories per cup but more Vitamin C than an orange, these fiber-rich veggies are the perfect addition to a summer night. Look for peppers that are firm to touch and bright in color. The smoky char-grilled flavor complements perfectly into a pasta dish, marinated vegetable salad, or as a complement to the main meal.

How to Grill Bell Peppers: Remove the stems and seeds from peppers and then either cut into long slices for a grilling tray/basket, chop into thicker strips for a skewered kabob or slice in half to grill the pepper whole. Brush both sides with olive oil and place the skin side down on a hot grill; grill for three to eight minutes on each side.

These purple-colored veggies are in peak season from July to October, making the end of the summer the perfect time to grab them at your local market. Low in calories, and high in fiber, their firm, meaty flesh are perfect for pastas, veggie burgers, meatless Monday dishes and ideal for blending into hummus and other spreads. Look for eggplants with firm, glossy skin that feel heavy for the size.

How to Grill Eggplant: Slice into thick rounds or cubes (depending if you want to use a skewer for kabobs, blend up later into a hummus/spread or serve on vegetable sandwich/salad). Heat your grill to medium-high heat and brush both sides with olive oil (optionally, you can season the eggplant with salt, too). Grill until golden-brown char marks begin to form, around three to four minutes. Turn over for another three minutes until the eggplant has seasoned marks and feel tender.

Corn on the cob is nothing new for the standard American BBQ, and really gives a “wow” factor when you throw it on the grill for guests. Sweet, white, yellow and bi-color varieties are in their peak season between July and August. Opt to choose organic or non-GMO corn from your local market this season (corn is one of the top GM foods in the marketplace). Serve corn on its own or add char-grilled corn to a fiery tomato salsa, over a taco black bean romaine salad or mix into a fire-roasted guacamole.

How to Grill Corn: There are three ways to grill corn. You can grill it “naked,” wrap it in aluminum foil or grill the corn left in the husk. Leaving the husk on is really easy to prepare, but can be a little messy to eat when you start peeling back the blackened husk. As for the aluminum foil, it’s the easiest to serve, but may take a little more time to prep. Place corn directly on a very hot grill and turn occasionally until charred and cooked through, about 10 minutes total.