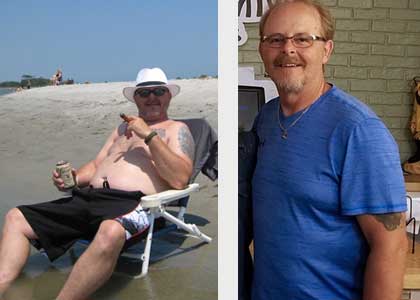 Tim’s Hypertension is in Remission

Tim’s back and hip issues had him on disability, and he was gaining weight. He had watched Fat, Sick & Nearly Dead with his wife, and was inspired by Joe’s dramatic health improvement after his Reboot. Fed up with being sick and tired, Tim finally bought his juicer, followed recipes from the blog, and watched the pounds melt away.* And he was pleasantly surprised at how his symptoms improved, too.*

I am on disability due to back and hip issues, and I’ve been gaining weight due to my physical limitations. My hobbies, which include archery, golf and walking, were put on the back burner for quite a while. I was using motorized scooters to shop for groceries due to my issues.

One morning, I decided I couldn’t take it any more

I remember waking up that morning and sitting on the edge of the bed thinking,“Great, another day of feeling fat, bloated and depressed because of everything.” I had a really hard time lacing my shoes and trimming my toe nails.

My wife and I had already watched Joe’s results in his movie, so I decided right then and there that I was going to try it. I went and bought the same exact juicer Joe was using.

It sat on the counter for almost a week before I started. I kept the receipt thinking that I might have to return it.

I went to a juice bar to try a juice and I loved it! Then, I started juicing at home.

Some of the recipes turned out looking like pond scum. I was being ridiculed and people were saying things like, “How can you drink that stuff?” But when I let them try my juice, they all liked the flavor and commented on how good it tasted.

I found some great recipes online and Joe’s website also. I was having 3 to 4 juices a day, along with water. I recall Joe saying if you can make it past day three you have made it through the hardest part of juicing. The movie and the results had really motivated me. I thought if they can do it, then so could I.

The pounds seemed to fall off me*

After almost a week of juicing, I had already lost three to four pounds, I was very motivated to continue and see what my results would be for next week’s weigh in. I had set a goal for myself to try and get to 195 pounds. I could not believe how fast the weight started falling off.

When I bought my first size 40 shorts, I had a belly girth of 48″ and I weighed 230 pounds I began juicing at the end of May at that size and weight. Today, I weighed in at 192 pounds after juicing for around eight weeks. I am now wearing a 35 and my waistline is 40”!

I was surprised at how fast my health improved

The amazing thing for me was that all of my medical issues had been eliminated! I just drank juices, I didn’t exercise or anything.

I had high blood pressure, high cholesterol, and I was hypoglycemic! Had I known that I could have such positive results from juicing, I wish I hadn’t waited so long to do something about it instead of taking pills to manage my symptoms.

I’ve reached my goal, and juicing is part of our live

I am still juicing, and I have a meal here and there, after reaching my goal of 195 pounds. I have mostly shrimp, almonds, fish, salmon or sometimes chicken. I plan to have a few juices a day and work in a meal here and there. I cut out dairy and red meat and plan to continue this plan for years to come. I want to thank Joe for sharing his story and motivating me to finally do something about my weight.

My wife has an occasional juice with me—only about 2 or 3 per week—and she has lost eight pounds!*

Now, I want to motivate other people to try it

I posted my results on Facebook after I had lost 30 pounds*, hoping to motivate at least one person.

My success has led to a lot of questions from my friends around how to start juicing, what kind of juicer I used, recipes, and so on.

Some of them replied by making excuses even before they gave it a try, things like “It seems like a hassle” or “I don’t have time.” My reply? “It takes less time to make a juice than it does to prepare a meal.”

I told them all, “You are still going to be the same in a month’s time. So why not try it? All you have to lose is weight. You wouldn’t be sorry.”