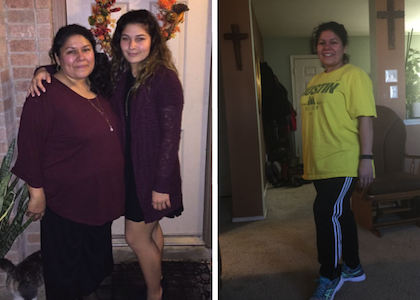 When Roberta and John Smith sat down to watch Fat, Sick & Nearly Dead, the couple had no idea they finally found the solution to their stubborn weight and health issues. They immediately bought a juicer and Rebooted for 60 days starting that weekend. By the time they were done, they had lost their migraines, swelling, back pain, and over 100 pounds combined.*

Why I Rebooted: To lose weight and stay healthy for my children

My husband and I had battled our weight all of our lives. We both tried different diets, but nothing worked. I was so frustrated that I was even considering weight-loss surgery.

I was also pre-diabetic. My mom is diabetic and on medication, and I’m very cautious of getting it. I don’t want to have to live on medication if I can avoid it.

We have been married for 22 years, and our oldest kid is 21. We wanted many more years together as a couple, and we also wanted to be there for our children. And also I want to be there to enjoy our future grandchildren (hopefully).

Migraines were affecting my work and life

Once I turned 40, I started getting debilitating migraines. At least once a month, I would get violently ill and have to leave work to go home and sleep. I suspected they were hormonal. When I finally decided to see a doctor, he put me on strong prescription medication to manage them.

One of my co-workers had been juicing and losing weight, and she recommended that I watch Fat, Sick & Nearly Dead. That was our ‘aha’ moment. We were both amazed at what Joe accomplished in just 60 days.

My husband was ready. He said, “Let’s get a really good juicer and start doing this.” We started our first plan on a Friday night. By the end of the weekend, we had our Reboot with Joe Juice Diet app and our produce ready to take on the week.

I personally used the app to track my Reboot daily activities and to find juice recipes. We were on the way to completing our first Reboot of 60 days.

Juicing was simple, but not easy

We live in the BBQ capital of the world. It’s so easy to go out and eat a quick fast-food meal. People thought we were crazy to just drink juice for two months. But I was committed to making the change.

I would go out with my colleagues, and tell them, “I have to do this for myself. But I’m not trying to make you uncomfortable.”

Our first Reboot was during the summer in Texas, so drinking juices was kind of easy. It’s so hot that you don’t really want to eat anyway.

But during the winter, I wish I had more juice options that were spicy. For me, it was harder in the colder months to drink juice.

My energy is sky high and migraines are gone

Once I started juicing, I didn’t have to take my migraine medication. I haven’t had any migraines at all!

It used to be that when I was done with a workday, all I wanted to do was go home and eat and sleep. Now, I’m going from month to month skipping through my days. My energy level is now really high.

After my first Reboot with my husband, I Rebooted again for 30 days in January 2017. I’ve lost about 70 pounds in total.*

My husband John lost weight and reduced swelling and pain*

Before starting our Reboot, John had edema (swelling) and he was wearing compression stockings to help him deal with it. He also has an electrostimulator implant in his back to help with back pain.

By the time we finished Rebooting for 60 days, he had lost 37 pounds.* He had a lot more energy, and he noticed that his back pain has decreased. He doesn’t have the swelling that he used to with his edema.

I took inspiration from the truck driver in Fat, Sick & Nearly Dead who changed his life and got healthy. I decided to start my own community juice fast just like he did. We now have a juicer in my office, and everyone is invited to replace their regular breakfast with fresh juice.

There are four other women in our morning juice group. They have talked about how their energy has increased throughout the day and that they have amazing energy in the evening. They look forward to juicing in the morning.

Our new healthy habits are a work in progress

We’re still on the path to better health. We’re probably going to do another Reboot for 30 days soon. I want to increase my exercise and lose more weight.

Though ultimately, it’s not about losing weight and being a certain size. It’s really about being there for our children and living our best lives.

I’ve always wanted to be more physical. But my weight was slowing me down. Now, I’m actually able to jog. I can run a mile slowly. My 18-year-old’s running pace is twice as fast as mine, but at least I can do more than I could before.

My daughter planned on Rebooting for 30 days, but she only got through 4 days of it. We just told her to start again.

People come up to me and say, “Wow—you lost so much weight! What are you doing?”

When I tell them I’m juicing, a lot of people think it’s crazy.

I get it—you’re scared. You think you’re going to be hungry. It may feel hard to break habits. But it’s just a choice. You can do it.

Just start. You got to start somewhere.

Give yourself time to adjust because your body is going through an intensive detoxification process in the beginning. If you’re gentle with yourself, you can do it.