Well, I can’t believe another week has gone by with four more cities checked off the US Book Tour list. I’m running on a natural high right now because I had such a fantastic week. It was a busy one because I managed to stop into four different cities on the east coast, met over 500 amazing and inspiring people, and juiced until my hands were about to fall off! Have a look at the journey I was on this past week. It was a memorable one to say the least.

First stop was Boston, Massachusetts.
I met so many wonderful people in Boston with incredible energy. It’s amazing how it can be so cold outside, but everyone is still so energized. Must be all the juice they are drinking! In just one night their juice bar made 80 juices and they used 65 pounds of carrots! 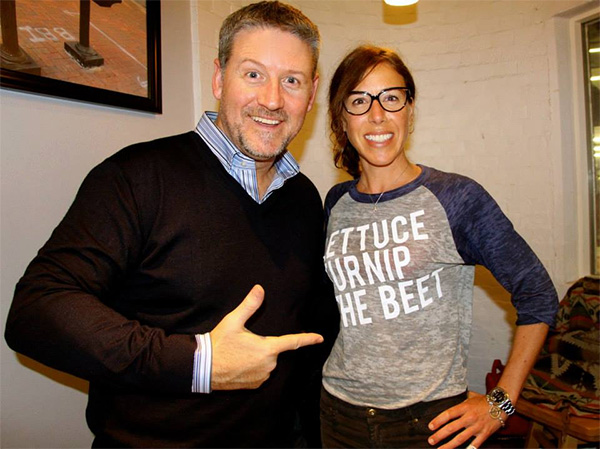 Another highlight…their dogs love juice too! Then I headed just outside the nation’s capital to Georgetown.

How great does Denise look? Ninety-nine days of Rebooting! Wow! It was such a fun crowd — huge thanks to everyone who came out. Bethesda was next on the tour. Barnes & Noble helped host a wonderful evening and I loved being in the kids’ secti0n! You can check out Winnie the Pooh behind me.

What a setting don’t you think!? 🙂 here at Barnes & Noble in Bethesda, MD! #joecrossbook pic.twitter.com/gTv9IBBEw4 The kids’ section was particularly nice for the young guys I had in the crowd. Good on these parents for starting them on their green juice early. Philadelphia, the city of brotherly love, was the last city I visited this week.

And to end my week I had the pleasure of spending my morning on Good Day Philadelphia! I think I Mike and Sheinelle enjoyed me Mean Green!

You can watch the clip here. One of my Camp Rebooters even came out to say hi! Good to see you Larry. I also enjoyed meeting a new success story, Angel. A friend told her I was at Essene cafe in Philly and she hurried down just before the event was over & shared her inspirational Reboot story with me. She had a very successful 60 day Reboot, wonderful Angela Juice on! Thanks again to all of the incredible people I met this past week. You’re the reason I love doing what I do. Juice on!

Don’t forget to catch where ‘ll b next week! Toronto, Detroit, Ann Arbor and Chicago!