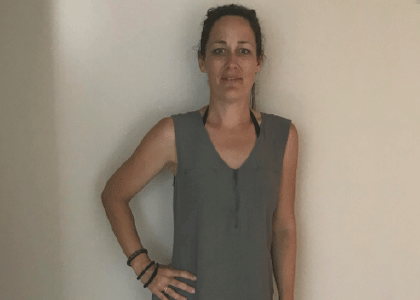 There was nothing really wrong with Kel when she found “Fat, Sick & Nearly Dead.” But she didn’t love the way she felt right before and during her period. Besides the PMS and cramps, she knew that her chocolate and chip-snacking habit was probably making things worse.

I’m a stay at home mom to two kids. I used to work in travel and accounts, and I have been a bit of a traveler all my life until the kids came along. I love yoga, keeping fit, reading and watching great documentaries.

I was not on medication, and I didn’t really want to lose weight. However, I had started to feel very tired a lot and a general sluggish feeling especially at “that time of the month” when I would reach for unhealthier snack options (like crisps, chocolate and coffee). This would lead to very uncomfortable headaches and cramping, which I credited to PMS all the time.

However, after watching Joe, it made me start to look at my diet and my habits. I was so inspired by Joe’s “https://shop.rebootwithjoe.com/products/fat-sick-nearly-dead-movie-set”>Fat, Sick & Nearly Dead” documentaries that I watched one night on Netflix that I decided to take on a 10 Day Juicing and Eating Reboot.

After going through a couple of stressful years and putting family and kids before me, now I had an opportunity to look after myself a bit. What better way than doing this Reboot?

My eating habits are much healthier

I am now nearly 20 days after that Reboot, and I don’t reach for unhealthy snacks anymore. I just don’t have them around, and I will go to fruit and healthier options all the time.

I’ve cut out fizzy drinks completely and go for water. I don’t have coffee in the morning. Now, I have hot water and lemon or a healthy juice from the 101 Juice Recipes book.

I go to a farmer’s market for my main shop, and when I’m in the supermarket, I go around the edge and very rarely venture down the middle aisles.

I’m still enforcing the new habits and just remember how I felt from my old ways of eating just makes me embrace this new way of living even more. It’s so uplifting!

My symptoms are gone

I have lots more energy now. I do not get the terrible headaches, and my cramping stomach aches at that time of month have become less painful and not so strong.* I sleep better at night, and I feel more well-rested.

I generally have a better sense of well-being and feel so much more positive about the choices I make now. I know they are the right ones that are nourishing my body rather than depleting it.

My family has followed me in juicing

The very best thing is my husband and children are starting to follow suit without much pressure from me. I try not to force juicing upon them as I know that wouldn’t work either. But they see me doing it, so I make extra juices for them now.

My children’s moods are changing for the better. My husband has started to lose weight and making healthier swaps too. I froze the juices I made from my 10 Day Reboot (as I would always do some extra) so he could take them to work with him. He is juice mad now, too. He can feel the benefits in himself. It’s so amazing!

My husband likes my boosted energy 😉

Another lovely thing is I want to have sex with my husband now rather than it being a chore. It is actually something I really want to do now and has become so much more enjoyable! I have a very happy hubby as a bonus… (ha, ha).

I would have started sooner to help my kids

I wish I’d found it sooner when my kids were really little to get their eating habits set up in a healthier way. Now that they are a little older, it’s a bit harder to try and change them without a lot of resistance for the sugar-laden junk.

But I’m working on it, and I strongly believe it’s a slow and steady process. If they see me eating this way, hopefully it will be a case of “monkey see, monkey do.” That’s what I’m hoping.

When friends ask what’s different, I can’t help but gush

I bumped into a friend recently, and she was saying how she was just out of a very long bout of sickness and she commented on how well I looked.

I said, “You wouldn’t believe it. I’ve just done this amazing Reboot.” I explained all about the “Fat, Sick & Nearly Dead” documentaries, and I showed her my app on my phone and told her about the amazing 10 Day Juicing and Eating Reboot, and how I’ve changed a lot of my habits. When you actually start talking, it’s amazing how so many people do want to do it, but just can’t seem to get going and park it.

I asked her if she had a juicer she said it was up on her kitchen cupboard collecting dust so I said “Gawd, dust that thing off and watch the documentary.”

She is about to go home now and watch it. I said to her if she wants to ring me because the first couple of days can be a bit hard so she said she is so excited. I’m keeping my fingers crossed for her. I also said about the team of nutritionists you have on hand there at the Reboot team if she needed any medical advice regarding her illness and how supportive the whole program is if she was worried.

What I’d tell you if you were thinking about Rebooting

I felt really good afterward. It is so worthwhile in the long run for your future health. We only get one shot at this life. Let’s try and make it a long healthy one, with lots of health and love as possible.

I’ve just watched a few family members sadly pass away over the last few years, and one of them being my Dad from cancer. I feel very strongly that it was brought on by unhealthy lifestyle choices, and I just wish I’d also found this Reboot sooner so that I could have helped him in adopting this better way of living. Maybe he would still have been around to spend some more time with his grandkids.

So I’m very pleased you’re using my story because it might be able to help someone else save their Dad or loved one before it’s too late. The amount of lives you’re helping is crazy, and I hope it spreads further for you!

I’m so grateful for the Reboot Team

I believe in the approach Joe took in the documentary because it was great how he didn’t force it on people. He was just like, “Look what’s it’s done for me and you could feel like this, too.” It was lovely to watch, and you could see people thinking, “I could do it.”

I loved the part with the gun man in Texas that seemed so adamant at the beginning about eating junk food and then when he revisited him in the next one he had adopted that lifestyle and just looked years younger, it was honestly so beautiful to watch.

I would just like to say a big thank you to all the team at Reboot with Joe to putting this wonderful thing together and especially to Joe who has had a huge impact on me and my family to help reclaim our health.

It’s just wonderful the amount of people this has changed and helped. It touched me so much seeing the documentaries and how some people were suffering just by the bad choices in food they were making and how Joe turned them to search for new ones in such a none forceful, fun way.

It was beautiful to watch these people’s suffering gone by a change in mindset. Thank you so very much! You are a star! All the very best for the future, and anything is possible!